I was fortunate to attend the 2017 Satoshi Roundtable on behalf of BitGo. It was truly a pleasure to meet many of the people with whom I have been conversing online for the past several years.

This “unconference” is a unique event, as it enables key players throughout the industry to openly (or privately) discuss any issues they want over the period of several days. Unsurprisingly, Bitcoin’s scalability debate dominated much of these discussions.

To be honest, I ended up not speaking during the first round of scalability discussions. I had little to contribute because all of the arguments were those that many of us have heard dozens of times before. I left the session frustrated and voiced my concerns to other participants, who agreed that our time was too valuable to waste running in circles.

One point that was abundantly clear: within Roundtable participants there was nearly unanimous consensus that Segregated Witness is a beneficial feature for the Bitcoin protocol. However, it was noted that those in favor of large legacy blocks tend to be enterprises that want to see more near-term growth. Many of these enterprises that voiced such opinions in 2016 did not return to the Roundtable in 2017.

Miners were also underrepresented at the Roundtable and much of the information about their stances was contributed via intermediaries. My takeaway is that Chinese miners seem ambivalent to supporting SegWit or Emergent Consensus. They’re reluctant to choose one because they have been bombarded for years with conflicting information from a variety of Westerners. From their perspective, we’re in chaos and their safest course is to take no action.

Due to how Bitcoin’s balance of power works, the default for any proposal to change the protocol is the status quo. As a result:

There are many possible paths that Bitcoin may take, though here are a few that some participants deemed to be more likely:

It looks like Segregated Witness may activate on Litecoin soon, which could result in us seeing a production Lightning Network on Litecoin that will show miners that it’s a safe path forward. If this brings value to Litecoin and the exchange rate rises, it may also show miners that SegWit adds value to networks and thus it’s in their financial interest to activate it.

Some speculated that there won’t be any substantial changes to the Bitcoin protocol until the economics of mining change after another halving or two. I myself have speculated that the mining landscape will evolve as the block subsidy fades into nothingness, though I think there are far too many potential paths forward that a complete stalemate is unlikely to last 8 years.

Worst case scenario, a sufficiently long stalemate will simply result in Lightning Network developers retooling the protocol to not require a transaction malleability fix. This will require a lot of extra work and result in a less optimal version of the Lightning Network.

Some people suggested that adding block space provides no guarantee that it will enable the network to meet demand for any reasonably long period of time. In other words, demand is sufficient that it will make use of all available resources. I tend to agree:

Miners could hard fork via Bitcoin Unlimited or Classic. This could result in two chains coexisting (depending upon hashrate distribution between chains) or it could be temporary. For example, if miners hard forked without sufficient economic support from nodes and industry, they would find it impossible to actually sell their coins and would likely switch back to the valuable chain. On the other hand, if there were two chains and exchanges supported both, large holders could dump all their coins on one chain and drive down its value past the point of mining profitability — at least until the difficulty adjusted enough, which could take a long time.

Some comparisons were made to the Ethereum/Ethereum Classic hard fork with the claim that it wasn’t disastrous and, in fact, now that both communities have gone their separate ways they are more focused and concentrate on building the feature that they find most valuable. Remember that there is no technical reason a similar divergence couldn’t happen in Bitcoin as well, and while it’s scary because it’s an unknown event, it may only result in a temporary panic as humans scramble to determine what form of machine consensus they want to follow.

If Bitcoin’s scalability does not change, then the nature of Bitcoin will change in terms of how it is used. For example, institutional investors have been hearing about Bitcoin for years, but very few have actually made any investment in it yet. The primary value that they see in Bitcoin is as self sovereign money/digital gold, not as a transactional currency. I spoke with some people on the investment side of the industry who believe that institutional investors will begin to move parts of portfolios into bitcoin in the next year or two, at which point it may spark a race to get in early. These types of bitcoin users won’t mind paying much higher transaction fees because they will be moving large amounts of value fairly infrequently. This could quite easily price out many people and use cases from Bitcoin if no enhancements to increase transaction throughput are activated.

Along this vein, Bitcoin will be simultaneously be egalitarian in free market terms and yet inequality amongst bitcoin holders will affect who is able to use it. But while the bitcoin wealthy may be first class citizens within the system because they can better afford to use it, one of the reasons the rich get richer in traditional markets is because they capture trusted institutions and predate on their fellow citizens, which is much more difficult in blockchain based systems. I recall one attendee making an extreme and yet sapient point: if World War III broke out, we can be assured that there would be attempts for powerful forces to exert control upon a system that is being used by a nation state’s enemies. We should strive to build a
system resilient enough to withstand such an attack.

Looking further past the scalability debate, fungibility could become an issue in the long term. Many Chinese companies are not keen to add enhanced privacy features to Bitcoin due to government regulations. When government officials visit companies and ask to know who a transaction belongs to, they need to be able to give an answer. We’ll cross that bridge when we get to it.

There was widespread agreement that there is a great deal of toxicity in the community. It doesn’t help that many of the available communication tools promote poor behavior. For example, Reddit’s voting system results in people voting based upon what they agree and disagree with, not with whether or not content adds value to a conversation. 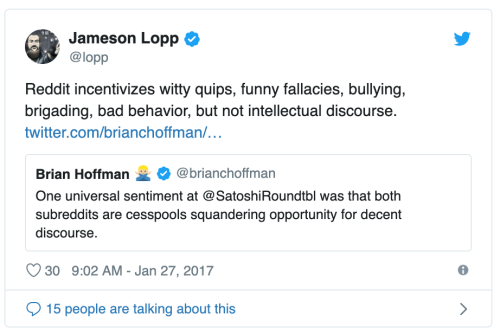 On the other hand, Twitter is good for certain types of communication but due to length limitation is wholly inadequate for carrying out complex conversations. It forces users to leave out details and nuances, which can result in misinterpretation and further contention between parties.

IRC is great for realtime chat, but is pretty much impossible to search through history and usually only a tiny subset of the community is on at any given time.

Bulletin board style forums can be better for long form discussions, but it’s often time consuming to sift through all the posts to find the quality content.

Mailing lists are probably the best for this type of discussion, but need to be moderated enough that you don’t end up with people unsubscribing because their inbox fills up. Fun historical fact via Wikipedia:

My personal hope is that a new form of content curation and discussion is invented that solves these problems. At the moment, I’m keeping an eye on Ryan X Charles’ Yours.

It was suggested that participants should lead by example and call out toxic people because they change the community’s atmosphere and turn off newcomers. While “don’t feed the trolls” is a good start, that may be insufficient — should we also call out the people who do feed the trolls, since they are incentivizing the trolls to continue operating? On the other hand, some people with whom I discussed this idea have told me from experience that it’s a wasted effort and doesn’t result in people changing their behavior.

I think that we need to continually remind each other that we have more in common than we have different:

During our first session we went around the room and introduced ourselves, also noting why were were attending the Roundtable and what we hoped to discuss. I rattled off a few items such as scalability, security, and usability, but then dove into the heart of the issue:

“I’m here to discuss the fundamental question that brought many of us here: what is Bitcoin?” 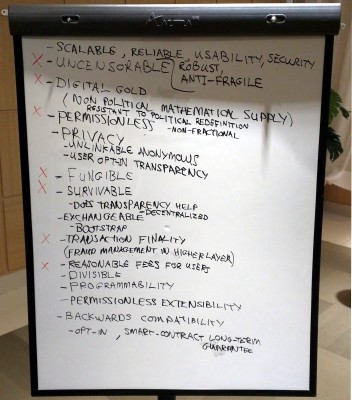 During one session we managed to compile a fairly lengthy list, with Xs denoting what we thought were the most important features for Bitcoin to protect and enhance.

It seems to me that nearly everyone participating in scalability debates agrees that this list of features is important and that all the hostility is simply over the order in which they are prioritized. Once again, a reminder that we have more in common that it may seem from observing online behavior. One of my favorite aspects of the Satoshi Roundtable is the civility and mutual respect between participants. Case in point:

We’re faced with a dilemma given that the Bitcoin protocol is capable of servicing a wide variety of use cases while the Bitcoin network is currently unable to service demand for all of these use cases. It is my sincere hope that some day Bitcoin can be “everything for everyone” and that we scale the system before too many people are priced out of using it, forcing them to migrate to less secure systems.

It’s an odd feeling to spend so much time discussing issues over which we have little control. Due to the power balance within the Bitcoin network, even if every company in the Bitcoin industry decides to support a specific change, it’s of little use unless miners and users also agree. Will our efforts at the Satoshi Roundtable help to move the community forward? I’m skeptical of them having a major impact, but am nonetheless glad that I attended and had the chance to have candid conversations with a diverse group of Bitcoin supporters. I can honestly say that despite any disputes, I consider all the attendees of the Satoshi Roundtable to be my allies in the same quest.

As a final note, I think Eric put it best: